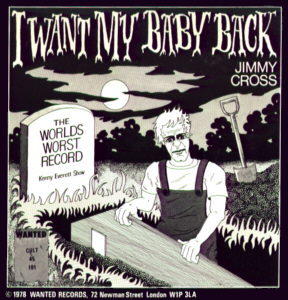 Melinama at Pratie Place has added significantly to my Great Halloween Songs list which, as you remember from my previous post, had only one song. While I was concentrating on Top 40 hits, Melinama's list is more eclectic - folk songs, world music, a song written in the middle of Hurricane Fran, and - the genre that I should have included on my list: Dead Teenagers. Both "Teen Angel" and "Strange Things Happen in This World" appear on the Pratie Place list, but there are several more to add to the set. Let's let "Monster Mash" stand on its own as a Halloween-Halloween song and start a separate DT (dead teenagers) list(and perfect for Halloween):

1. "Last Kiss" by J Frank Wilson and the Cavaliers (1964). Yes, I know Pearl Jam did a cover a few years ago. Pretty standard car-crash-girlfriend-dies-in-arms song.

2. "Tell Laura I Love Her" by Ray Peterson (1960). Have you noticed that all the dead girls in these songs are named Laura or Laurie ("Strange Things Happen in This World" is also known as "Laurie.") Car crash, wedding rings - you've probably got the picture by now.

3. "Leader of the Pack" by the Shangri-Las (1964). At last, a victim NOT named Laura/Laurie! Who doesn't love this song? "My folks were always putting him down (down, down)" and the famous "Look out! Look out! Look out!" And also, these chicks could tease hair - I mean they were tough. High hair, lots of eye-liner. But the guy still ends up dead.

4. "Endless Sleep" by Jody Reynolds (1958). Movin' away from car/motorcyle crashes and on to suicide. "Why did we quarrel? Why did we fight? Why did I leave her alone that night?" I guess so you could write a song kids could dance to on American Bandstand . . .

5. "Patches" by Dickie Lee (and I'm guessing this is the same Dickie Lee that sang the "Strange Things Happen/Laurie" song, so ya' gotta wonder about him) 1962. Girl from wrong side of tracks loves boy from right side of tracks. Another suicide song.

There are more, believe it or not. Why on earth there were so many DT songs in the 1950s and 60s is a study for sociologists, I guess. Obviously, somebody was trying to warn us about something. The dangers of automobiles? Young Love? Wearing letter jackets? Exchanging high school rings? Being named Laurie? I smell a thesis . . .

Find out more about DT songs here and here.
Posted by MaryB at 9:48 PM