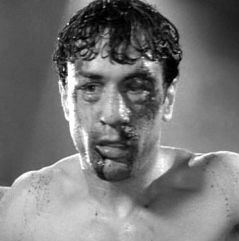 Ever have one of those days where you run into things, trip over invisible objects, and drop everything you pick up? Sure you have. And so have I. Today.

I dropped everything from brushes to pens to a bowl of spinach (which I managed to catch just before it hit the floor - whew)!. Stuff just slid through my fingers all day long. But that's not the worst of it.

The worst of it was running full-speed-ahead into a whacking great iron air-conditioner cage on my way to work. These may just be New York head-bangers. No one in my 'hood wants their street-level a/c stolen from the window, so they encase them in thick iron-barred cages that protrude a couple of feet from the side of buildings. At least, that's how it works in Spanish Harlem.

Anyway, I was walking - which, if you know me, means a marathoner's running speed - head down, so I wouldn't trip over something on the sidewalk, when - bam! One of these a/c iron-barred cages slapped me upside the head. My first thought was "Who hit me with a shovel?" The corner of the thing bit me right at my forehead and hairline. Bit is not strong enough, unless the bite is coming from a Great White Shark.

Color me one stunned klutz. A single trickle of blood made its way down my forehead, but I had no idea how bad it was. I was close enough to my apartment to stagger back to survey the damage. Fortunately, the cut was minor, but I do have a lump the size of, oh, somewhere between a golf ball and tennis ball. Yeah, big. And, yeah, I put ice on it immediately.

Even knowing that it was my Klutz Day, I went on to work. I needed folks to keep an eye on me, in case I went to sleep and didn't wake up. Ibuprofen helped. A lot. And it was a fairly productive day, despite all the time spent picking up stuff I'd dropped.

Here's hoping tomorrow is my Graceful Day. I can't afford another lump on my head. I'm fuzzy-brained enough, as it is.
Posted by MaryB at 10:54 PM

I'm glad you lived through Klutz Day Mary. I've definiely gotten a LOT klutzier than ever before. Maybe it's an age thing...I don't know; but I'm always dropping things or running into stuff. It's like I've forgotten how to navigate through everyday life. Sheesh! ~Joy xo