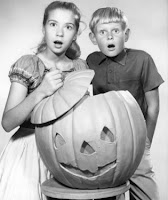 You know how much I love my Halloween movies. Only scary stuff radiates from my television, DVD player, and computer screen during the month of October. I mean, if you can't dig down into the depths of your twisted psyche during the season of ghosties and ghoulies, when can you, eh?
I stand by my list of Halloween film fare criteria and my favorite Halloween movies posted in 2005. Do your homework, and check it out here. But every year I find new classics (oxymoron?) to add to my annual Film Fear Fest. So each week for the rest of the month,  I'll post three movies worthy to add to my Halloween list that I've discovered/re-discovered, thanks to streaming video on the web.

Here are the Halloween Horror Hits, week of October 9
Dr. Terror's House of Horrors (1965): Here's a British offering, starring the UK's equivalent of Boris Karloff/Vincent Price, Christopher Lee and Peter Cushing. The token American is a young Donald Sutherland. Six strangers on a train, tarot card readings, bizarre glimpses into the future, and a Twilight Zone-y kind of ending. What's not to love? 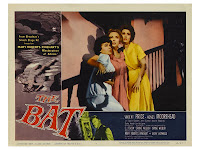 The Bat (1959): This one surprised me, in a good way. I was expecting the standard Vincent Price thing, but Agnes Moorehead rules this one. She's a mystery writer staying in an old spooky mansion where the owner has hidden cash he stole from his own bank. Agnes is fearless. No squealing, frightened woman is she! Bonus: a grown up Darla Hood puts in an appearance. It's a good little thriller. And, yes, bats - the flying kind - are involved. 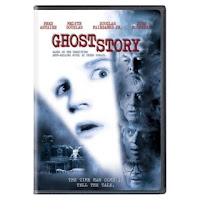 OK. Go forth and stream a good scary flick. I'll see if I can find three more good 'uns by next week. Now, pass the candy corn.
Posted by MaryB at 8:25 PM

I don't think you've featured it before, so I can recommend "Dead of Night" a black and white British film of the 1940s.

It's a 'portmanteau' film, with half-a-dozen stories, but the final segment, with Michael Redgrave and a ventriloquist dummy is pure creep-out scarifying.

Looks right up my alley, Pete. I'll have to really seek it out, since I can't find it on Netflix or Hulu. Maybe Turner Classic Movies will air it this month. I'll keep my eye out. Thanks for the suggestion!