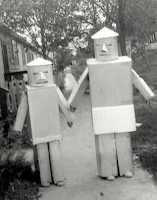 Another October week has passed, and though I spent four of the last seven days at a conference in Colorado, I managed to view some pretty good scary movies via my trusty netbook. I'm dying to see PT's suggestion of "Dead of Night," but it's not offered on Netflix or Hulu. I'm on the look-out and will find it before Halloween. It's obviously a classic I've missed along the way.

Here are this week's suggestions:

Burn, Witch, Burn (1962) - Lousy title for a pretty good little movie. Professor who teaches about psychological effects superstitions finds his wife engaging in various forms of voodoo and witchcraft, claiming to do it to protect her husband from jealous colleagues. A few twists and turns, plus a giant stone eagle comes to life. A nice cozy little black-and-white movie, perfect for the season of Halloween.

Yea! I'll check it out and report back. Dead of Night is on almost all "greatest horror films" list, so I must see it. Thanks!