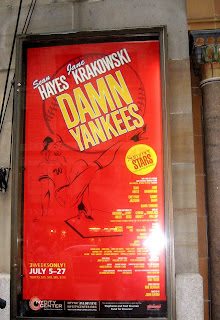 . . . Lola got at Damn Yankees today. Such fun! Not as much heft as Gypsy the other night, but wonderful music, plus the original Fosse choreography. Sean Hayes from "Will & Grace" played the Devil, er, Applegate, and Jane Krakowski from "Ally McBeal" played Lola - both fabulous. And who can resist songs like "You Gotta Have Heart," "Whatever Lola Wants," "A Little Brains, A Little Talent," and "Who's Got the Pain (When They Do the Mambo)?" Good stuff.

Lest you think I've come into some money (I keep hoping . . .), this was another cheap seat deal. Evidently, ticket sellers don't think folks will pile into theatres over the 4th of July holiday so they deeply discount a batch of tix. I just took advantage of the incredible offers, that's all.

And now for a couple of theatre complaints. Ahem. And they have nothing to do with the performers; these are audience complaints:

1. People, this is theatre. Broadway theatre. This is not a weekend barbeque or bowling night. Show a little respect for the art form and dress appropriately. I'm not asking for furs and tuxedos here, but you certainly shouldn't be wearing shorts, denim, tube tops, or any other housecleaning attire. Simple business (and I mean professional office-type business, not street-cleaner business) clothes are appropriate. Lord a mercy! What folks wear nowadays! Do they even look in the mirror before they leave home? I'm embarrassed for them. You'd think they were chilling out in the Barcalounger in front of the TV instead of sitting in a lovely Broadway theatre.

2. People, this is theatre (Part 2). This is not your living room (see above). Running a conversation during any part of the performance - including the overture - is strictly a no-no. What? The orchestra isn't performing? It's background music? No, it is not. And reserve your side comments and questions for the intermission or for after the show. Sheesh! Where do these people come from? (Sounded like Queens or New Jersey.) Perhaps if they were dressed appropriately, they would act appropriately.

OK. Enough kvetching. Damn Yankees was damn fine (except for certain audience members).
All together now:

You'll be happy to know that I've been teaching my Katie about appropriate theater behavior. She loves dressing up, so no problems there. And she's already an ace at throwing "the look" at anyone who dares to talk during the performance. I'm embarrassed to say that I didn't know that talking during the overture was a no-no. Not that I do it. I'm too busy listening. But I didn't know that. I thought that once the curtain rose it was ssshhhhh to everyone. Guess you're never too old to learn something -- thanks!

Sounds like a great show. You're making NYC call me over and over. It really is time for another visit soon.

one of my favourite childhood memories is being allowed to stay up late and watch Damn Yankees with my brother and parents. I loved it! 'Whatever Lola wants, Lola get's' and 'Heart' was an other one I loved.

Glad you liked it!

You're so right about those inconsiderate theater-goers, Mary. We have the same problem with theatre-goers over here. West End shows are now a tourist attraction, rather than a cultural entertainment, and some individuals seem to treat the performers as though they were in Madame Tussaud's!

We went to see Chicago a little while ago, and were surrounded by a few 'sideshows'. The 'lady' next to me was alternately humming and singing along to all the songs. The 'superfan' a few rows in front was clapping too loudly and too long after every number. And the chap directly in front of me was drunk and oblivious that his quiet asides weren't so quiet. (Though Mr Drunk redeemed himself by suddenly realising, in the second half, how much he was enjoying the show. He was becoming more and more engrossed, so much so that when Roxie and Velma were getting stuck in to their final number, he shouted out "Go on, girls" at the top of his voice - a sentiment we all shared!)