The 4th of July Vermonster Parade 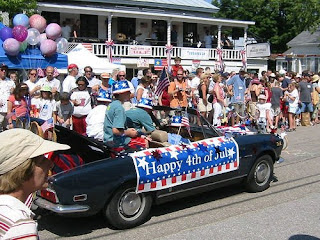 A hundred years ago or so - 1970's/80s - we had a house in Waitsfield, Vermont, near the ski resort Sugarbush. It was a "family" house, a place for the Brennan clan to gather whenever it could break away from whatever it was doing, wherever it was doing it.

The 4th of July was a big occasion for the gathering - food, fun, laughter, food, Trivial Pursuit, food, etc. One highlight of the holiday was the annual parade over in Warren, VT. It was the quintessential 4th of July parade, cute as all git-out.

One year I arrived in Vermont to find out I'd been given the on-site parade coordinator job. Evidently, some in-fighting had occurred within the New Englander ranks and my husband volunteered me to handle the enormous task of lining up the parade participants and giving them the cue about when to march or drive out.

The rationale for chosing me was two-fold. First, I wasn't from around there. I only knew a handful of folks - mostly family members who lived in the area - and I wasn't burdened with a long, in-bred relationship with the parade-people. Second, as a senior television producer at Turner, the committee felt I had the organizational skills to pull it off. (Well, they were right about that.)

I was just a whippersnapper. Only 29, I think. But you know how young'uns are. Invincible. So there I was, this young Southern bossy gal giving marching orders (literally) to crusty Vermonsters - "Legion Post 5382, go NOW!" "Start that big red truck NOW!" "Podunk High School Band, line up NOW!" Funny thing was, they did as they were told. Such power in the hands of a Girl Raised In The South (GRITS)!

Well, the Warren parade is still a big deal, but I haven't been there since the last time I gathered with the clan in 1984. Kate was just over a year old. We all spent time having fun, food, Trivial Pursuit death matches, and, yes, attending the parade. I played a more relaxed role that year. I just watched. But I knew that somewhere a mile or so down the road was some poor person yelling "Start that big red truck NOW!"

Oh my gosh! I'd LOVE to be in charge of sending off a parade!

I just can't see it ever happening - I might have to start my own, just for the power kick!