Snakes and the City 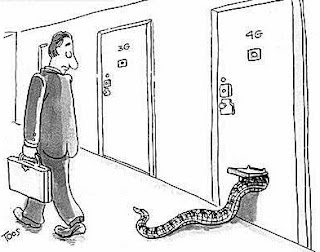 Evidently, excitement reigned supreme around here yesterday morning, but I was too busy sluggin' it to notice. I just learned from neighbor Allie, who lives one floor below me, that she and her hubby awoke to find a 4-foot anaconda curled up in their living room. Imagine their surprise!

They called Animal Control, only to find out Animal Control doesn't work on Saturday. (Hmmmm.) Next, 911. Allie said they had about 11 NYPD in their apartment at one point. It took a long time to wrangle the snake because it had crawled in back of the refrigerator and wrapped itself around the back coils. The police had to remove the back of the fridge and pull the snake off with one of those long poles.

Theory is that it must be someone's pet because it was clean and well cared for, but as far as anyone knows nobody in the building has a snake. The landlords Fred and George were unhappy to hear of it, I tell ya'. Only dogs and cats and birds in this building. Er. Or so we thought. No one's claiming it. Yet.

Also, the neighbors had no idea when or how the snake got into their apartment. Allie said it had been there long enough to leave a poop-trail. Aaargh! I'm not that afraid of snakes, but knowing one had been slithering around all night in my tiny rooms would've sent me screaming out the window. Yuck.

I'll report back when I get more details. Wonder if HBO would like to pick up an option on "Snakes and the City"?

PS - Does anyone else miss having Winston comment on his/her blogs? I know good and well he woulda' commented on this one. Sigh.
Posted by MaryB at 5:35 PM

Eeeewwwwww! Aren't anacondas dangerous?!!! Having that thing slithering around your apartment would be distressing... then again having 11 of NY's finest would probably take the edge off.

Wow! How scary is that!!

Oh MaryB, I miss Winston so much. He would often be the first to comment on my blog - sometimes the *only* person to comment. Thank you for mentioning that.

Oh the thought of any snake...let alone an anaconda slithering around through an apartment building gives me the creeps Mary...BIG TIME. That will keep you on your toes.

I miss Winston every day sweetie. I think about him and miss his comments EVERY DAY....I still go to his blog....I'm not sure why. I've even been going to his wife, Kathy's, blog to see how she's been doing. Gosh I miss that sweet guy. ~Joy

Yeah, anacondas are dangerous. Guess we were all lucky!

I still go to Winston's blog, too. And I read Kathy's, as well. Still can't get of the shock of it.