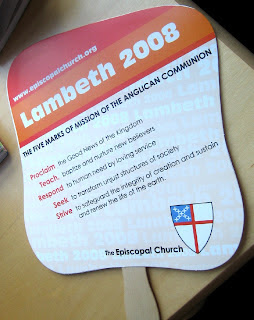 Big conferences are tiring. Days start early and end late. You have to be (or appear to be) knowledgeable, friendly, and interested for 10-14 hours a day. You do a lot of sitting (if you're a workshop participant), standing (if you staff an exhibit hall booth), and walking (because whatever you need - food, ATM, sleep - will be miles away from wherever you are at the moment).

Then there are all the little unexpected surprises. Temperatures reaching the upper 80s with 70% humidity in a country that eschews air-conditioning. A computer that refuses to acknowledge your heretofore-acknowledged photo disk (aaargh!). Being consigned to two weeks' of cold breakfast because your particular lanyard is the wrong color (white, not purple or red).

But not all of the unexpected surprises are bad ones. The best kind are the impromptu conversations that crop up throughout the day. Some of the conversations are bridge-builders, allowing the people at either end of the bridge to at least meet in the middle. Some are laden with "isn't it a small world?" and the wonders of six degrees of separation. And some start out very ordinary and grow into conversations of amazing possibilities.

The other evening after a long day in the exhibit hall, friend Elizabeth and I met up with another friend, Hellen Wangusa, on our way back to our dorm. Hellen is the Anglican Observer at the United Nations and based in our offices in New York. We were three tired women, I tell ya', as this kind of conference wrings it out of a person. The main topic of conversation as we made our way to the dorm was where to eat dinner - go down to Canterbury or endure one more University of Kent meal. Hellen decided not to join us in Canterbury but opted to come to our rooms while we unloaded our laptops and put on comfortable shoes.

We didn't intend to get into deep conversation about anything. We were tired. We were hungry. But at some point our brains woke up and big things started happening. It started off with a mention that many voices weren't being heard during the Lambeth program time, even the time for spouses. American women (well, fine, we were expecting to be marginalized) and developing world women were virtually left out of the program presentations. We were particularly concerned that our sisters from remote areas of South India, Myanmar, Kenya, and many other areas didn't have a forum for their compelling stories. It was obvious to all of us that those stories weren't going to push through at this Lambeth Conference. How could that change in the future?

Hellen sat on my bed, while Elizabeth and I drew chairs closer into a tighter circle as the conversation progressed. Could Hellen's office not find a way to pull together all the powerful women's groups and networks across the Anglican Communion (and there are many) to make sure these incredible stories of triumph and need and despair and hope rise above the silly din of political posturing? Believe it or not, no such umbrella task force exists. These groups seem to work at cross-purposes most of the time, accomplishing not much of anything except baby-steps to affect change.

I loved Hellen's story about her daughter's explanation of music re-mix. "Mom, it's like your old familiar music in the background, while our new interpretation is layered on the top, giving the old song new life." In other words, we have the comfortable/familiar given a new spark.

Well, "re-mix" became our watchword. How could we re-mix, re-imagine a new way to work together? The old familiar, with the new/young/fresh? Specific goals and ways to reach them came out of nowhere (i.e., three tired women). Names of traditional stakeholders and fresh faces began to emerge from the three of us. Plans were made for Hellen's office to pull these women together to begin the conversation. We surprised ourselves with what we came up with in this moment at the end of a long day. We held hands, said a prayer, and were re-energized.

Such an ordinary slice of time - three tired women, a little conversation to pass the time. But that moment was ripe for big ideas to pop. Ideas that just might make a difference if we follow through and bring in more (and less tired!) minds. Just a little conversation.

Just three tired women.
Posted by MaryB at 3:11 AM

Whatever you want or need from St. Paul, MN, count me in. I am a tired woman, too. Tired and ready for new life to be created out of the old stories. Hang in there, girl!

Thank God for girlfriends.
Hang in there, the best is yet to come!

Beth! Where have you been? (Oh, yeah, some pilgrimage to Wales, or something, right?) Glad I can count on you, tired woman.