Proud Alum of Wassa Matta U 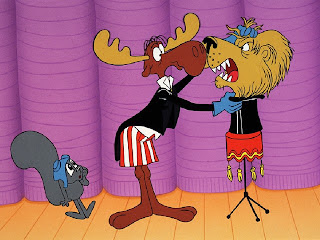 I have a hankering to indulge in a Rocky and Bullwinkle cartoon-fest. I'm in serious need of a good dose of Mr. Peabody and Sherman, Fractured Fairy Tales, Boris and Natasha, and lines like: "Hey, Bullwinkle. We're in real trouble now!" "Oh, good, Rocky. I hate the artificial kind."

The show, a brainchild of Jay Ward and Alex Anderson, was a kind of Borscht Belt-Cold War-cheap-animation-schtick combo that worked on many different levels. Rocky played the straight-man, er, squirrel and Bullwinkle, the loveable doofus. Boris, Natasha, Fearless Leader, and Mr. Big were the baddies you loved to hate. Mr. Peabody and Sherman told us the truth of history, thanks to the WABAC machine. Edward Everett Horton spun fairy tales with a little twist.

And didn't you love the cliff-hanger endings? An example courtesy of Wikipedia: "Be with us next time for 'Avalanche is Better Than None,' or 'Snow's Your Old Man.'" Great stuff, friends.

Raise a glass to the denizens of Frostbite Falls, Minnesota. Throw a couple of DVDs in the WABAC machine, don your Wassa Matta U sweatshirt, and prepare to catch on to all those jokes that went right over your 10-year-old little head back in the day.

Weren't we lucky kids? Rocky and Bullwinkle, plus Mad Magazine and "Twilight Zone." No wonder younger generations hate us. Hey! Wassa Matta U?

Remember Four Feather Falls and Super Car? All creations of the great British puppeteer Gerry Anderson. And Captain Midnight? Man, what I wouldn't give for a tall glass of Ovalteen. "Be quick, be keen, drink chocolate flavored Ovalteen."

I don't remember Four Feather Falls and Super Car. Are those English kiddie shows? Or did they come along after my time? I do know Ovaltine, though. Very well. Mmmmm. (just remembered I gave up chocolate for Lent so I can't indulge for a few more weeks.)