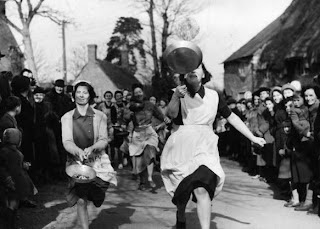 Goodness! How many big events can converge on one puny little Tuesday? Super Tuesday. Super Bowl Tuesday - as in, big triumphant confetti parade for the New York Giants through the streets of our fair city. And Fat Tuesday/Mardi Gras.

Not enough for you? Other reasons to celebrate February 5:

As for me? Not-so-fat Tuesday. I've lost another 1.8 pounds, which brings me to a whopping 6.2 lbs. lost over the past two weeks. I even got a special star today for crossing the 5 lb mark. Still, the thought of a plateful of Shrove Tuesday pancakes is making my mouth water.

So, if you don't like any of the "Tuesday" choices today, take heart. It's almost Wednesday.
Posted by MaryB at 4:50 PM

Yay! Well done, Mary. I hope you enjoyed your pancakes!

You don't have 'stones' (14lbs) do you? It's all just pounds. We have to wait another 2lbs before we get a sticker - each half stone is our big milestone! ;o)

I was a good girl, Jo. Didn't have any pancakes yesterday. Sigh. No, we don't have "stones" here, so out goals are easier to reach! (I'm still waiting for that picture - )

I promise I'm thinking about a picture. My natural instinct is to hide from cameras, so you'll have to bear with me... :)