Of Palms, cranes, tornadoes. And a right good potato knish. 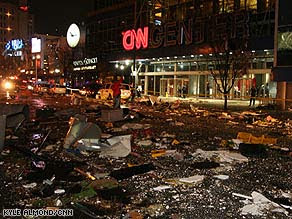 Pretty wild couple of days, eh? Tornadoes rip through downtown Atlanta. A whackin’ great construction cranes crashes to earth just a few blocks from where I work. And we’re heading into Holy Week. Is it that time of year already?

As far as I know, Atlanta family and friends made it though the whirlwinds just fine. At least, I know for a fact that Kate did. Haven’t heard from anyone else, but as they say, no news is good news. Good luck with the clean-up down there, guys. Downtown looks a real mess.

I spent yesterday boppin’ around the Lower East Side. Those poor folks in the tenements of old would be surprised at the rise in property values down there. Lots of cute, trendy shops and restaurants. I poked my head into Katz Deli – of When Harry Met Sally fame (you know The Scene) – but it was crowded and over-priced, so I poked my head back out and headed for a little hole in the wall shop called Yonah Schimmel’s Knishes to get in touch with my Jewish side. I mean that figuratively, since I don’t have a legitimate Jewish side (as far as I know). Old Yonah Schimmel’s was comfortingly crowded as well, but I found a spot at a back table and had a lovely knish and a cup of borscht. Yum. Good stuff.

Well, seems that while I was happily strolling around the LES and knishing, a huge construction crane was crashing down into buildings a few blocks from where I work on Second Avenue. I didn’t find out about that until I got home. Can’t imagine the damage if it had happened on a typical work day. Yikes! Four dead, several very serious injuries, and three missing.

A joyous, holy Palm Sunday to all. To me, the lesson of Palm Sunday is, man, how quickly a crowd can turn. One day, it’s all palms and Hosannas; then just a few days later, it’s Crucify! A good study in mob mentality, me thinks, through no one really preaches much about that. Still, a good lesson to keep in mind when folks are waving palms your way.
In spite of all the weekend wildness, it went by 'way too fast. Sigh.
Posted by MaryB at 9:51 PM