Middle Child Syndrome can turn on you 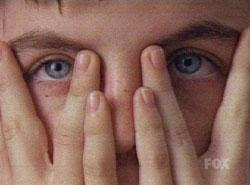 Now, I've been told that these are classic "middle child" characteristics, though, truth be told, I was a darn rowdy middle child. And damned proud of it. In fact both of us middle children - older bro David (God rest his soul) and me, the middle two of four - seemed to cause the most ruckus growing up. Be that as it may, while I like a good set-to now and then, I want it to be a friendly, fun set-to, nothing fraught with bad ju-ju.

Alas, this morning my middle child fears were realized here at work. As previously mentioned, we are in the throes of reorganization, and while the official line is that we are to keep doing our current jobs until April 1 and under no circumstances work on "new job" tasks, the fact is that I've been called upon several times in the past couple of months to "work ahead." This at the behest of the Powers-That-Be. Who am I to refuse, eh?

I've diligently done my current job throughout it all, while taking the new stuff home to work on at night or on weekends. Just to keep the peace. So, yeah, I've been working both ends of the system and burning the candle at both ends for quite a few weeks. I've done it because my current boss is not taking this reorganization thing very well. She's very, very touchy about it. So in my best middle child way, I've tiptoed around her and tried to keep any upper-level requests of me out of her sight range.

Bad move on my part.

She found out about one project from a 3rd party (and yeah, I should have told her, maybe, instead of trying to keep the peace), came into my office, closed the door, and went ballistic.

I really had no defense, except that my new bosses (and hers) had gone around her to pull me into these projects. That much was painfully obvious, of course, but I certainly didn't point it out to her. Yes, she has been demoted and somewhat sidelined in the new scheme of things, and she hasn't dealt with it very well (*understatement*). The fact that I didn't get (or need) her permission to do this stuff came across as salt in the wounds. Ouch. The term "back stabber" came out a couple of times.

I was in agony. I love and respect this woman, but I am angry with her at the way she's handled the changes that are taking place (yeah, my problem , I know). I want her to rise to the occasion, and she hasn't. And it's been going on for about 6 months. We're all tired. And frayed. I close my office door and turn up the tunes, or go to lunch with happy, positive friends to avoid dealing with the angst. It makes me sad. That conflict-thing, doncha' know. Ugh. I was crushed by the tongue-lashing. Still. I guess in an effort not to stab her in the back, I stabbed her in the back.

We settle into our new offices in a couple of weeks. Things should calm down then. At least I won't be in her sight-line, though I think we will be working in close proximity.
This "serving two masters" is a tricky thing for a middle kid. Growing up, we could've settled this with a good old fashioned pine cone battle. Sigh. Gin and tonics all round tonight, me thinks.
Posted by MaryB at 4:23 PM

Sorry, Mary. Having survived more than one corporate re-org, the last one dubbed "down-sizing", I have seen this kind of behavior before. Of course, it stems from frustration in general and pent-up anger of those who are in fear or have already found out their fate. I'm sure you understand, being the intelligent Suthuner that you are, that nothing she said had anything to do with you. She was a walking-around time bomb just looking for a place and reason to ignite. You had the misfortune of being in her sights at the time.

It sounds like you did the only appropriate thing - take it without shooting back. Maybe the next two weeks will pass quickly. Maybe she will come to her senses and recognize she was wrong. But don't be surprised or feel scorned if she doesn't. Keep your head, walk proudly and do your damn job(s). And have another gin and tonic on me...

Winston - I certainly empathize with my current boss and understand how much she is hurting. However, it's been almost 7 months since the new organization was revealed and most of us have grieved or celebrated or gotten on with the business at hand. I'm concerned that she is spiraling ever downward, rather than accepting what's happened. Intervention counseling is really needed at this point, and I believe it has been offered to her. It's sad. She's a good friend, a smart lady, and really knows her stuff.

Lil sis - believe it or not, she can "out-face" me! I know you're quaking in your boots about that. My pitiful little "face" can't hold a candle to hers. :-)

What's really scary about this whole situation is that you guys are working for THE CHURCH! If these kind of things go on in what should be a peaceful, prayerlike atmosphere just think what our 'government' must be like. I'm surprised anything ever gets done.
(or does it??)

You need to tell that woman she needs to go into her office for a "time out" and think about how she is acting and seeing how this is a "CHURCH" situation and this is the middle of Holy Week maybe she should be doing a little prayer time. (It kinda seems as though she needed a demotion) Now doesn't that sound like something Mother would say?

A blessed Easter to all.
Your OLDER Bro.

Well, Bro, that's why every little incident, change, word, deed is heightened beyond all reason. We ARE working for the Church. We don't do this kind of thing very well, alas. And according to my friends in the Methodist, Lutheran, Presbyterian, and UCC churches, no church handles a reorganization well. I think some
hot-shot consulant could make big bucks specializing in guiding faith-based communities through personnel changes.

Yes, my boss needs to pull up her big-girl panties and move one.

And yes. It's Holy Week.

Jobs are not worth all the angst. That's my belief. I'm a middle child, too. That makes me want to avoid conflict and lounge on a tropical beach somewhere, forever.

Well, I'm not a middle kid....I'm the baby out of two, but I'm just like you sweetie....EXACTLY! I don't like dischord or angst or fighting of any kind....and work very hard to make sure there always is harmony. How realistic is that? But honestly Mary, I don't see that you did anything wrong...not in my eyes. But it's so often in trying to do the right (better) thing you often wind up with the exact opposite outcome.

Lots of tension going on in your office....and understandably so. I remember the very same things from my last job when they started to 'down-size.' It's a hard thing to go through, and fear of losing one's job makes for some touchy situations. I hope this woman comes to realize that she is taking her fears out on you...but if she doesn't.....keep a clear head and a stash of gin and tonics handy. You are one terrific lady.....

I'm sure if they did some kind of survey, they'd find that church workers are least able to handle conflict or deal with difficulties in work. Your soon-to-be-ex-boss sounds like an angry and defeated woman who had no right to take it out on you. I hope the long Easter weekend will see things calmed down.

At least now that things are out in the open maybe it'll be a little easier for you?

Hang on in there, mary!