Thanksgiving movies: Is there a reason the pickins are slim? 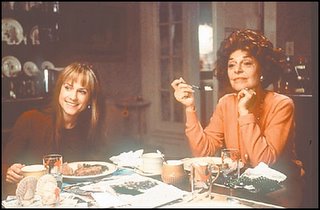 You knew it was coming, didn't you? I made such a big whoop-de-doo over movies during October that you probably guessed I'd trot out a list of Thanksgiving-themed flicks. (Just wait'll next month!)

It's interesting that in contrast to innocently scary Halloween films and overly-saccharine but can't-do-without Christmas ones, there just aren't a lot of Thanksgiving movies out there. And the ones that are - well, they're kinda edgy. Must be the pressure of getting the family together and just sharing a meal, as opposed to covering up the problems with a lot of presents and candy canes.

At any rate, I've gathered together - and not only to ask the Lord's blessing - the few Turkey Day offerings available. You'll need to ration them for yourself this month, since there aren't enough to last from now to the big feast day.

1. Home for the Holidays (1995) - Directed by Jodie Foster and starring a whole lot of cool people - Holly Hunter, Anne Bancroft, Robert Downey Jr., Charles Durning, Geraldine Chaplin, well the list goes on. Folks looking for a feel-good film do not like this one; believe me, it is not the Thanksgiving equivalent of White Christmas. Kate and I thought it was hilarious when we saw it ten years ago, and I still try to catch it when it runs on TV. The turkey mishap with prissy Cynthia Stevenson's character is memorable. It comes to mind whenever I'm wrestling the turkey (the family Thanksgiving's always at my house) into submission. The Home family is not at all like my own - we're disfunctional, but not at Thanksgiving as our mouths are too full and our belts too tight to fight about anything - but it's fun to watch other families implode. Hee-hee.

2. Planes, Trains, and Automobiles (1987) - Steve Martin and John Candy have to share all sorts of things, including transportation and beds, just to make it home for Thanksgiving during a blizzard. You can see the jokes coming from a mile away, but so what? It's Steve and John. Just be thankful you're home safe and warm.

3. Pieces of April (2003) - I rather enjoyed this little independent film when I first saw it, but now with the creepy Katie Holmes/Tom Cruise thing happening I'm afraid it's ruined for me. Katie's character goes to great lengths to cook a Thanksgiving meal in her teeny apartment for her visiting family. Patricia Clarkson as the mom dying of cancer, is great - as always. Such an underrated actor, in my book. It's another disfunctional family movie. Anyway, if you can hold your nose on the Katie Holmes front, you can get through this one.

5. A Charlie Brown Thanksgiving (1973, just a different 1973 than The Ice Storm) - I know it's just a television show but too bad, I'm gonna keep including Charlie Brown movies on my holiday film lists. Lord, we have to have something uplifting on this list, don't we? The toast-and-popcorn feast is great (except for carb-haters). Grab a little cup of cider and settle in for 20 minutes or so of real Thanksgiving spirit.

There are other films that include Thanksgiving scenes in them, for example Holiday Inn and Miracle on 34th Street, among others.

But there's only one movie about the honest-to-goodness Pilgrims - The Plymouth Adventure, starring Spencer Tracy, Gene Tierney, and Van Johnson - that comes to mind. Wonder why? Why aren't there more Pilgrim movies? Ooooh - I smell a screenplay opportunity for somebody. A musical would be fun. All that maze . . .

Well, I guess Thanksgiving's really just about watching football and getting the jump on Christmas movies, rather than highlighting the day at hand. Still, you gotta wonder what film-makers have against Thanksgiving. Must have something to do with ingesting tryptophan and canned pumpkin. As always, feel free to add to the list.
Posted by MaryB at 12:19 PM

This is a terrific list. I loved "Ice Storm" and "Pieces of April" but have not seen "Home for the Holidays." Just might have to try that out this weekend!

Your blog is a great find. I'll be back.

you gotta wonder what film-makers have against Thanksgiving.

I think Thanksgiving might just be kind of boring, screenwriting-wise. How many movies can you make about people sitting around in a food coma watching TV? Christmas is different. Shopping. Snow. Santa. Now there's drama.

Yeah, Nobody - I was thinking the same thing. Although is there is potential drama/comedy in food stupor, family tensions, and pilgrim/immigrant metaphors. (Plus, some old fart who keeps yelling "Get outta in front of the TV! I'm trying to watch the Bears game!")I'm sure there's a myth or Canterbury Tale that correlates, somehow.

Tamar, I suspect "Home for the Holidays" might be right up your alley. Let me know what you think.

I love the thanksgiving!! i like when my husband and i have a good time together specially when we are with all the family celebrating the thanksgiving. Is sure this year we´ll be happy all of us together and enjoying. But i am thankful because my husband buy viagra and he has more self-steem.I am really happy.

I am interesting to watch Thanksgiving movies 2015. I love Thanksgiving day and feel gratitude to others and like to take turkey.

wow amazing collection, one can find some best Happy Thanksgiving Images and Wishes from here.

Amazing!!! I like this website so much it's really awesome.I have also gone through your other posts too and they are also very much appreciate able and I'm just waiting for your next update to come as I like all your posts... well I have also made an article hope you go through it. Happy Thanksgiving Wishes , Merry Christmas 2017 , New Year 2018

I'm just waiting for your next update to come as I like all your posts... well I have also made an article hope you go through it. Amazing!!! I like this website so much it's really awesome. Happy Thanksgiving Pictures

Robin said...
This comment has been removed by the author.
1:23 AM