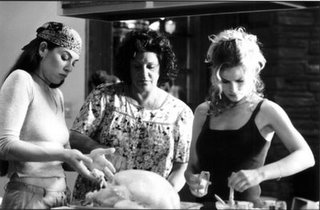 The most popular blog page in my brief blog-career has been my post on Thanksgiving movies, which tells me that people are hungry (get it - hungry . . .) for something seasonal to watch on the run-up to next Thursday's grace-saying-pig-out fest. Well, I gave it my best shot here, but I do have a few additions, though I've only seen half of these:

1. Alice's Restaurant (1969) - It's been a long time, but I remember it's about a "Thanksgiving dinner that can't be beat," Arlo and Woodie Guthrie, hippies, Vietnam. Many people consider this a Thanksgiving movie must-see. I'm going in search of it now to refresh my rapidly flaking grey-matter.

2. The Myth of Fingerprints (1997) - This one I haven't seen, so maybe a fan can fill in the details. According to the review it's in the family-angst-around-the-dinner-table genre and stars Noah Wylie, Julianne Moore, Hope Davis, Blythe Danner.

3. The House of Yes (1997) - This is a weird one, but if you're crazy about Parker Posey (and who isn't?), you need to see it (just ignore the Tori Spelling parts). Thanksgiving is sort of oh-by-the-way in this one. Let's see - sibling obsession-compulsion, Jackie Kennedy fixation, Catherine Deneuve as the mother. Not for the faint-hearted. But c'mon - Parker Posey!

5. What's Cooking (2000) - Another one I haven't seen, but it really piques my interest. It tells how four different ethnic families (and aren't we all ethnic? but you know what I mean) celebrate Thanksgiving: Hispanic, Vietnamese, Jewish, and African-American, with a cast that includes Alfre Woodard (don't you love her?), Mercedes Ruehl, Joan Chen, Kyra Sedgwick (don't you love her, too?), Juliana Margulies, Lainie Kazan. OK, I'm sold. Where can I find this?

I'm leaving off the TBS original National Lampoon's Thanksgiving Reunion since every review called it a dog - woof! - but feel free to check it out and report back.

My segue movie between Thanksgiving and Christmas is always Miracle on 34th Street (the Natalie Wood one, natch). One of my most sacred Thanksgiving traditions is donning the flannel pjs (shorty? you ask?), filling a tray with fabulous left-overs, and plopping in front of the TV to watch a 1940's version of the Macy's parade with Maureen O'Hara in charge of it all. Ahhhhhhh!
Posted by MaryB at 9:38 AM

Do you hate me because I like the remake of Miracle on 34th better? I know, but the little girl is so very cute and Dylan McDermott is so very hot.

Well, Nobody, we'll just have to agree to disagree on this one (and hate would never come into it!). As cute as Mara what's-her-name is, she can't hold a candle to little Natalie Wood. And the whole resolution to the new version is wrong-wrong-wrong! In fact, I don't really understand how they get Kris off in the new one. But when those mail bags come pouring in to save his ass in the original - soooooo sweet. And Cole's? What the hell is Cole's? Obviously couldn't get Macy's blessing to use the Macy's name. No thank you. But. I'll stand by your right to choose the new over the original. (Dylan McDermott is adorable, I'll give you that.)

You're missing the top British movie of Thanksgiving:

"The Thursday We All Went To Work As Usual"

Hardee-har, PT. I don't understand why the British don't celebrate Thanksgiving. It was started by a bunch of English folk (and Native American folk) when that particular plot of land in Plymouth Colony belonged to England.

Listen, you're all missin' something here - all you do is eat and watch TV, plus get a day or two off work. I'd reclaim it if I were you!

If not, I smell a screenplay in "The Thursday We All Went To Work as Usual."

Enjoyed reading the article above , really explains everything in detail,the article is very interesting and effective.Thank you and good luck for the upcoming articles. Thanksgiving Wishes 2019