We come from the planet Turquoisia, and we come in peace 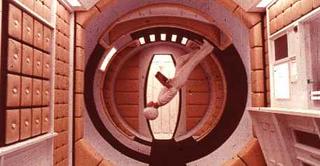 I was promised wall-walking in 2001: A Space Odyssey
Here's a follow-up to my post about disappointment in 21st fashion and technology (Jane Jetson). Look at this picture. This is what I'm talking about. Is there anything this cool right now? Nooooooo. No futuristic clothes. No jet-packs. No space malls. Who failed us on this? I want names and numbers.

Oh, and you need to know that the planet Earth has been renamed Turquoisia. Spent yesterday afternoon with my 8-year-old bud Joanna, just hangin' out in the park. Lots of silly talk that started with the usual 10-minute naughtiness about Uranus led to the conclusion that - hey - "Earth" isn't such a good name either (though not as hilariously funny as Uranus). All the other planets are named after ancient gods and goddesses, except for Earth and (you guessed it) Uranus. (See how many times I managed to say Uranus? It's addictive, I tell ya'.)

Joanna and I decided we wanted a better name, something that reflects the blue and green of the place. She came up with Turquoisia. It's a little long and hard to spell, but other than that I think it sums things up nicely. Just think: Mother Turquoisia, Turquoisia shoes, turquoisia-bound, moving Heaven and Turquoisia . . .

Actually, we decided Turquoisia would be a temporary moniker until we found a goddess's name worth using. Suggestions?
Posted by MaryB at 12:33 PM