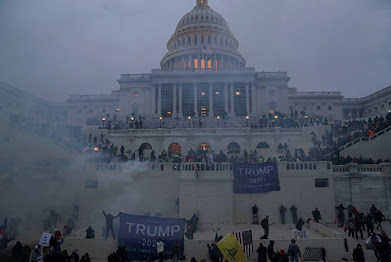 We knew they were coming. We had plenty of notice. They'd been publicizing it since it became clear that their cult-leader president had lost re-election.

They were coming to Washington, D.C. on January 6 to try to stop the certification of the Electoral College votes for President-elect Joe Biden.

Well, let 'em come, right? Let 'em swagger around making goofy threats, waving their stupid Trump flags. Men acting like little boys with their brainless women - what could they do?

The Capitol is well-protected, and there's always the National Guard. Look at all the over-reaction to peaceful protesters in June - tear-gas, rubber bullets, huge show of force by law enforcement. Naturally, all this would be in place to greet the Trump whackadoodles, right?

Oh how wrong we were.

Goaded by the most disgusting man ever to hold the office of president, the MAGA idiots stormed the Capitol building, intent on destruction and perhaps murder of elected officials. Videos show Capitol police opening the barriers for these terrorists and are most definitely complicit in this act of domestic terrorism.

Can you tell how angry I am right now?

Hm. What was the difference between the over-reaction to peaceful protests in June and the lack of law enforcement reaction to this mob terrorist attack on our nation's Capitol?

I'm so angry, I can't complete this post in any cogent manner. How many law enforcement officers were involved? Military? Elected officials? How can any American with half a brain support this?

More violence is promised by these low IQ, trashy thugs in the coming days. We shall see if this country can hold together. Democracy is fragile, evidently, and what we thought was a foundational Constitution is being shredded by 40% of our population.

Maybe I should be fearful, but what I am is angry. Steam-coming-out-of-my-ears angry.

Oh, and coronavirus cases and deaths have skyrocketed.