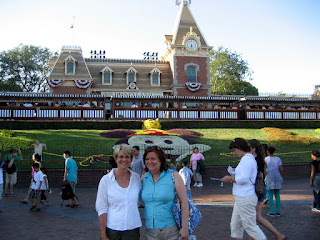 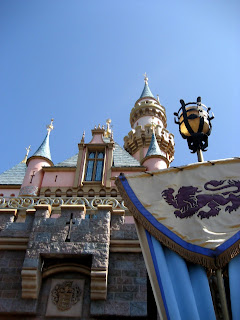 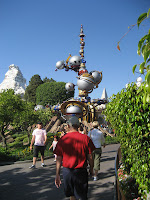 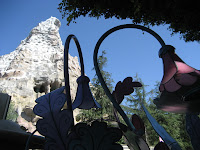 So, if your dream is to spend a little time as your 8-year-old self, try Disneyland. It's cute as all git-out. And thanks again, Mother and Daddy, for showing us the Happiest Place on Earth fifty years ago.
Posted by MaryB at 6:27 PM

Where do I start on this. Did you mean to sound quite so grumbly? (new word alert)
I looooove this place, it has a wonderful family vibe that makes you feel ....safe and happy. An Odd feeling for a hulking 39 year old man to have and to admit - ha ha.
I guess I might have a different take if I did Disneyworld.
I like the Nemo update over the old 20000 leagues thing before. It really needed spicing up. As far as the Indiana Jones ride goes, we agree as a family it was our favourite of the whole park! We did try something more modern when we went into the Californian Adventure park, but it just didn't 'cut the mustard'. It was like another imitation theme park that didn't come up to scratch.
Its quite possible that I am too easily pleased living in the UK where we don't really have anything that genuinely compares to it, even Disneyland Paris!!

all the best
Chux

Oh, Chux, I really didn't mean to sound grumbly about Disneyland. I thoroughly enjoyed myself both times I was there. I *do* disagree with your take on 20,000 Leagues vs. Nemo (thought Nemo was pretty lame - perhaps just a refresh of 20,000 was all that was needed) and on the Indiana Jones ride (I'll take Space Mountain or the Teacups any day!). Disneyland was wonderful and I enjoyed going back after 50 years. I think that Disneyland is better if you have young families (say, kids under 8-10) and DisneyWorld is better if the kids are older. Both parks are clean, "safe and happy." Don't know about Disney/Paris, but both CA and FL are terrific. (Try FL sometime and let me know what you think.) Cheers!