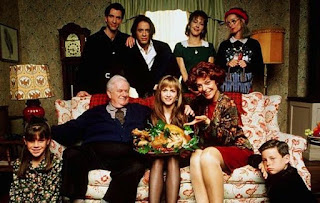 Yeah, yeah. I know. Everyone adores the Hallmark holiday movies, but I've never been a big fan. If you've seen one, you've seen 'em all. (Overworked big-city single mom/single girl finds herself in some bucolic backwater, falls in love, and ditches the big bad city for the countryside. Yawn. I'll stick with the big city and singlehood, thanks.)

If you're more into edgy, sarcastic, hard truth-telling, honest happyish endings, let me introduce you to three of my Thanksgiving favorites. 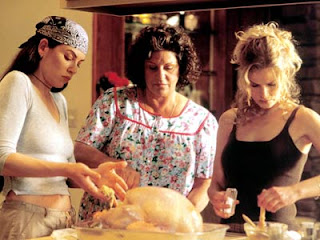 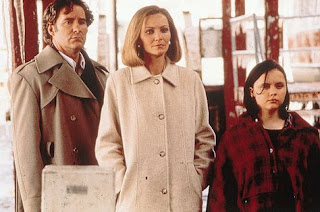 The Ice Storm, 1997. Directed by Ang Lee. Ensemble cast: Kevin Kline, Joan Allen, Sigourney Weaver, Christina Ricci, Tobey Maguire, Elijah Wood, Katie Holmes, Jamey Sheridan, Allison Janney.
Of course there are a few other non-Hallmarky Thanksgiving films - Pieces of April and The House of Yes come to mind - but this is one holiday that doesn't get much love from movie-makers, so you take what you get. And in case you think I just enjoy depressing movies this time of year, I love A Charlie Brown Thanksgiving, Garfield's Thanksgiving, and all the Thanksgiving episodes of Friends. I am thankful for those.

Eschew sugar this Thanksgiving. Go for solid meat. None of these are turkeys.

Email ThisBlogThis!Share to TwitterShare to FacebookShare to Pinterest
Labels: Home for the Holidays, Thanksgiving movies, The Ice Storm, What's Cooking