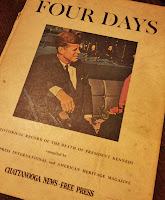 The announcement came over the intercom during my 7th period study hall. I was 12 years old. I do not remember the exact words Mr. Bible, our principal, used to tell us that President Kennedy was dead. Did he say that? Or did he say he'd been shot? I just don't remember. But we were sent home immediately. Then everything got weird. And all my sense-memory tells me to this day is that it was dark. Dark.

Presidents just didn't get assassinated in 1963. Yes, we were busy fending off the USSR and ducking-and-covering, but assassinating the President? How John Wilkes Booth-y. I know it's hard for younger folks to understand, but it really was the end of innocence for those of us at the older end of the generation of "Look, Ma, no cavaties!", "Let's Twist Again Like We Did Last Summer," and "Yabba-dabba-do!" After this, anything could happen. Anything.

My enduring image of Friday, November 22, 1963, is that of quiet darkness. As usual, Daddy took us to the Red Food Store on Ringgold Road for our weekly grocery run on a late autumn night. The store was open. Just. There seemed to be fewer street lights, neon signs, and car headlights as we pulled into the parking lot. We were part of only a handful of people out and about that night. I guess we got what we needed and went home.

But fifty years ago tonight, it was dark. So dark.