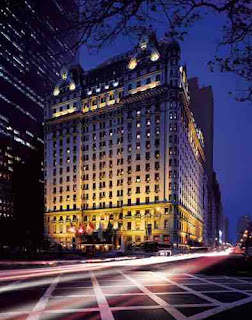 There's not much "sugar" in the "medicine" of having to get up at 3:00am in order to strike out by 4:00 to catch a 4:40 train to Washington DC, so I wasn't expecting much on my pre-dawn ride from East Harlem to Penn Station. I dragged my sleepy butt into the spot-on-time, pre-scheduled car in the hope that I would rouse up enough along the way to crawl through the station and roll onto the (right) train.

But, you know what? As the car turned left onto Fifth Avenue at 115th to zip down to 33rd, there was no way I could close my eyes and lean back. On my right, a huge, nearly full moon grazed the tops of the Central Park trees. "I'm with ya', kiddo," it called out to me. "At least, until we get to all those Midtown skyscrapers." We caught all the lights just as they turned green, so it was smooth sailing past the park, the Guggenheim, the Met, the toney Upper East Side rich folks apartments.

The Plaza and its fountain were lit up and looking end-of-summer spectacular. Bergdorf's, Tiffany's, all-night Duane Reades and diners had store windows ablaze. And, yes, the City That Never Sleeps offered us plenty company in the form of traffic.

Bottom line, it was worth waking up for. A moonful of sugar helps the waking-up-at 3am medicine go down. Spectacular city!
Posted by MaryB at 8:42 PM

My first thought when I read this is Wordsworth's poem... I'm sure Miss Smallwood would be so proud..
Bro.

Earth has not anything to show more fair:
Dull would he be of soul who could pass by
A sight so touching in its majesty:
This City now doth, like a garment, wear
The beauty of the morning; silent, bare,
Ships, towers, domes, theatres, and temples lie
Open unto the fields, and to the sky;
All bright and glittering in the smokeless air.
Never did sun more beautifully steep
In his first splendour, valley, rock, or hill;
Ne'er saw I, never felt, a calm so deep!
The river glideth at his own sweet will:
Dear God! the very houses seem asleep;
And all that mighty heart is lying still!

I like this post Mary...and your view of the trip to the train station in 'the city that never sleeps.' There are so many wonderful things to look at on the streets of NYC. Nice.