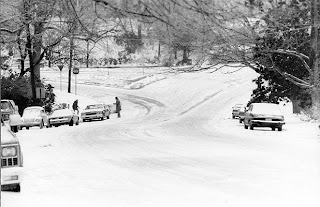 Far and away my most popular blog-post is the one I did a couple of years ago about Atlanta’s infamous “Snow Jam ’82.” The event looms large in the psyche of any Atlantan who experienced a 6-hour/3-mile drive, bunking in with co-workers, or who really did walk five miles in the snow - not barefoot, maybe, but certainly without the benefit of snow-boots.

In celebration of yesterday’s snowfall across the Southland, I deem it highly appropriate to share several of the Snow Jam ’82 stories added to my original post via comments. Maybe these tall tales will spark a few memories of your own.

From jcb: “This is when I started using the catchphrase "City Paralyzed!" in response to any snow whatsoever. Walked to and from TBS twice during that (just under 2 miles then.) Remember typing winter storm crawls for local (as opposed to satellite) and just kinda arbitrarily putting them on. There is a great edited tape from snowjam that still makes the rounds.”

From Anonymous: “I grew up in Roswell and remember just about everything about Snow Jam. As a background, Atlanta had been peppered with ice storms for several winters in the late 70's and early 80's that had brought down power lines, felled trees, iced roads, etc., so TPTB were very cautious with any winter weather. Plus the ATL at the time was much smaller than it is now so the infrastructure was less developed and the resources of the DOT were not as deep . . .

The forecast the next day was not bad. I think for Tuesday morning was in the 20's. However, there was a real possibility of snow at some point during the day. So guess what ... school systems that had egg on the faces from the previous day made the early call cancel school for Tuesday. The day was cold but not too cold and pretty nice.

After lunch the sky turned grey and then with much disbelief it started snowing - I remember it starting in Roswell about 3-ish. Ironic (?) because we would have been out of school by the time it actually had started snowing. It snowed pretty hard the rest of the day and night.

My Dad worked for an Ad Agency at North Ave & Peachtree and since that was long before the days of the wider and extended 400, he had a long slog home. I think he waited until after 6 to leave but he made the trek up 75 to 285, around the Perimeter and up 400 to Holcomb Bridge before 9 PM. He got a good laugh about traffic and the panic since he learned to drive the in snowy hills of Ohio.

We were out of school the rest of the week. It snowed until about midday on Wednesday and stayed around until the weekend. A quick second follow-up snowstorm came on Friday but it was all gone by Monday. A sequel to Snow Jam came a year later in 1983 but it was not as big or as long. The TV station tried to keep the Snow Jam brand alive for a couple of more years, but we never really had anything like it again.

From Anonymous #2: “I remember Snow Jam very well also. I was in a Decatur classroom taking a test for a job with several others. I noticed that it began to snow, but went on with the exam. As the snow fell heavier & heavier, I asked the person giving the test if we we're going to be allowed to leave. She went & checked with other classes & found that we were the only ones left in the building!

As I was driving down Memorial Dr., up ahead I could see that big hill by Dekalb Co. police station. And while I was watching from the bottom of the hill, I saw cars sliding every which way. I knew I'd never make it, so I pulled into the parking lot of a liquor store (yes, I made a purchase while I was there), & used their phone to call a cab. All lines were busy, so I set out on foot, walking up Memorial Dr. toward the interstate. A guy in a 4x4 gave me a ride to the interstate ramp & I was walking down the entrance ramp when a woman who had just picked up her daughter from daycare stopped to give me a ride. She took me all the way to my house & refused any money I tried to give her. So don't ever let anyone tell you that there aren't any good people here.” 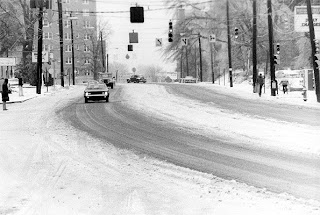 From Anonymous #3: “Thank you, thank you, thank you for remembering this storm! I'll NEVER forget it! There were no real warnings or anything! I was at work in a meeting and saw this icy snow falling and became a little jittery. My boss allowed some staff to leave but wouldn't allow those in my meeting to go home until we completed our business.

Finally, at about 3:30 PM, we were the last to leave. It was unbelievable! I was on Northside Dr. creeping along on my way to my home in East Point & giving young men from the projects a dollar here and there to push my car up the hills. I think the kids made a lot of money that day! The ice was just plain dangerous! Cars were sliding all over the place because it was heavy icy snow! Three men approached my car and asked for a ride & for the first time in my life I said "what the hell," told them I hoped they weren't rapists and let them in. Thank God I did...they were security guards and helped me navigate the ice until I was close to home. It took me 5 hours to get there! My usual drive home took 30 minutes.

I must say though that it was exciting even with abandoned cars, people filling up every motel and hotel in the city and everyone told their stories for weeks on end! "Snow Jam" started 1982 off with a big bang & is an apt description of the worst storm I'd ever driven through in my life and I'm from Cleveland, OH!!!”

Oh, those Snow Jam stories! Since I last posted on the event, a blog devoted solely to Snow Jam has cropped up at http://www.snowjam82.com/ . It lists some other resources that should bring a warm glow. I credit Bybee Web for the photos here. Now, go have a cup of cocoa and remember when.
Posted by MaryB at 12:08 PM

I wish our recent snow incident had a name! As it is, it'll just be, "Do you remember when it really snowed?" "Yes, when was that?".

Well, think up a name. Let's see. Snow Show '09? White Out '09? It doesn't really matter - choose a name then use it forever, just change the year.