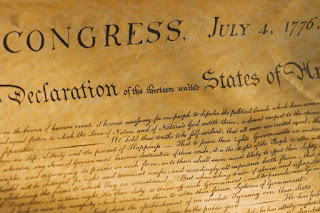 Happy 4th of July, Coronavirus Edition. It's a good day to read the Declaration of Independence, watch the musical Hamilton, and eat a hot dog or two.

I celebrate those men who holed up in that sweaty Philadelphia room for months wrangling over whether or not to break with England and figure out how to unite a collection of colonies with widely differing interests and concerns. I celebrate their wives and families who indirectly had a voice in what Thomas Jefferson would craft into the historic document.

I celebrate the tenacity of John Adams, Benjamin Franklin, Richard Henry Lee, Robert Livingston, Roger Sherman, Jefferson, and the others who brought intelligence and passion to the very difficult task of laying the foundation for the American Experiment, spelling out their grievances against King George III and Great Britain.

I celebrate the idea that all people are created equal and have the basic human rights of life, liberty, and the pursuit of happiness. 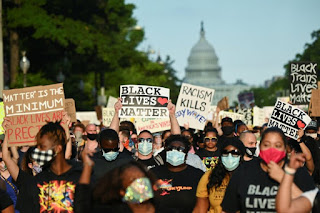 I celebrate the fact that the early patriots were brave enough to put in writing that they mutually pledged to each other their lives, their fortunes and their sacred honor. They were committing treason after all, punishable by death.

But I'm having a hard time celebrating what we've become. We have the most divisive president in the nation's history, one who stokes racial, moral, and intellectual hatred. Yes, we've had some weak presidents in the past, but never has the United States had someone so soulless and ill-prepared to bind us together and move us forward as one nation with liberty and justice for all.

We in the majority are being ruled by a minority whose power comes from manipulating voting systems and suppressing votes. This minority works from fear and white privilege. It works from a skewed knowledge of history and governance. It works from strange financial interests that usually work against the real personal interests of the minority. 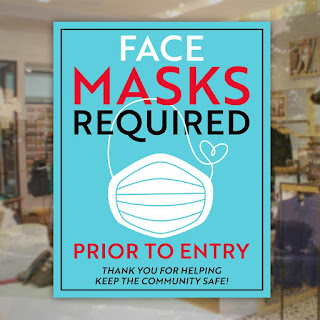 It's frustrating and tiring to try reason and goodwill with this 35-40% of our population.  Everything it stands for flies in the face of what was hammered out in Philadelphia in 1775-1776. There is no compromise. There is no intelligence. There is no true patriotism. Only hatred and fear that often wears a sweet "Christian" face. I can only assume the Beatitudes are missing from their teachings. Jesus wept.

And now we're in the middle of a pandemic that only seems to get worse because of these fearful, hateful people who refuse to follow the simplest rules to keep everyone safe. Freedom! Independence! Guns! White power! And so the infection rate and death toll climbs every day. At the very time we are called to come together to protect each other, we have the biggest failure of leadership and true patriotism in history.

The United States is badly broken. Facts are ridiculed. Science ignored. The magnet on our moral compass is missing. Until we can get back to liberty and justice for all - all races, creeds, national origins, sexual orientations, socio-economic groups - we are doomed. Perhaps this implosion has been happening for a long time. Perhaps we were never united enough to improve upon the original concept of our country. Perhaps we'll never figure out how to ensure that all of us - all of us - have the same opportunities. 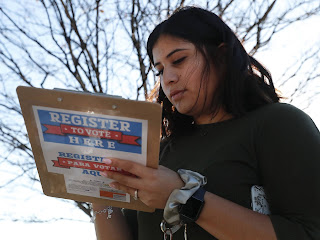 But this is a nation built on hard (often enslaved) work, intelligence, and crazy dreams. My faith is in my sisters and brothers who can reverse this poisonous trend. My faith is in our people who are working to guarantee that everyone's vote counts. My faith is that our scientific community - made up of good people from many national origins - can find answers to climate change, pandemics, and other issues facing us and the world. My faith is that our creativity and humor and common sense will pull us out of this destructive vortex we find ourselves in.

It's not just about the true majority winning November's elections (and I'm praying for a real blow-out across the board). It's about undoing all the harm done over centuries, decades, and - yeah - the last three years. We have to find a way to rise up and govern intelligently and compassionately.

The work seems insurmountable. In the words of Hamilton's George Washington: "Winning is easy, young man. Governing's harder." But we can do this. I just know we can.

Well said, Mary. Sure hope we can do some substantial cleanup after the election.

Thanks, John. Lots of work ahead, that's for sure.