COVIDiary: A Hard Year for Heroes 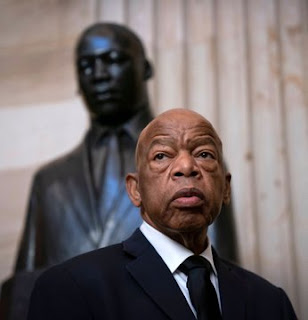 This is a hard year for heroes.

Everyday heroes who keep our basic services up and running. Medical heroes who are trying to keep us alive. Heroes taking to the streets in protest of racial injustice. Performance heroes who have found ways to entertain us while not getting any sort of remuneration. Unknown heroes who died of COVID-19 and other diseases without loved ones being able to properly celebrate their lives.

It's been a particularly tough year for heroes of the civil rights movement: the Rev. Joseph Lowery, Connie Curry, C.T. Vivian, and now my congressman, John Lewis.

In 1986, when John Lewis ran for Congress for the first time, I was working as a producer for the Atlanta Journal-Constitution's short-lived Video Edition. Everyone thought the race was a foregone conclusion because Julian Bond came within a couple of points of winning the primary outright. But a run-off had to be held between Bond and John Lewis, though most thought Bond would be the winner. 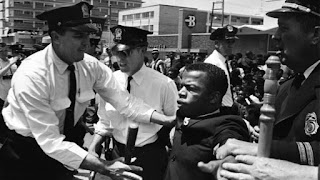 I mean, I was all set to vote for Julian Bond. He was smart, well-spoken, good looking, and another civil rights icon. In 1966, when the Georgia General Assembly refused to seat him as a duly elected member because of his anti-Vietnam War activities, the case went all the way to the Supreme Court. Bond won a 9-0 decision from the court. What's not to vote for, eh?

Lewis hadn't fought in the Supreme Court. He'd fought in the streets. On the Edmund Pettus Bridge in Selma. He'd spent 40 days in prison because of his activities as a Freedom Rider. He had the scars. He, too, was smart and a powerful speaker, but he just didn't have Bond's style and finesse. 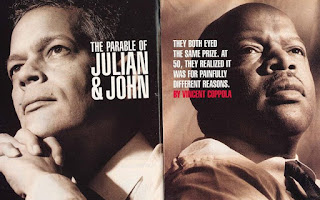 In the great scheme of political talk shows during election years, I had to set up interviews with both Lewis and Bond for the political editors of the AJC. I started with Bond's campaign office. I was handed off to at least three different staffers who promised to get back to me. Frustrating. I felt I had to get Bond on the schedule first (because he was going to win, right?), and after a few days and who-know-how-many phone calls and call-backs, I got him on the interview schedule.

Now to get John Lewis. Dreading what I assumed would be the same days-long cat-and-mouse back-and-forth phone tag game, I dialed (yes, we dialed back in 1986) Lewis' office. 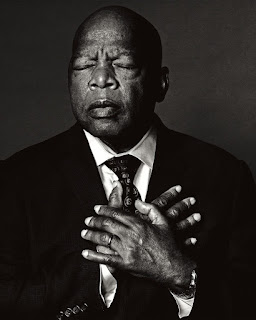 Guess who answered the phone? John Lewis himself.

It threw me for a loop, and I stammered out my request for an interview. I knew I was talking to a major force in the civil rights movement - and he answered his own phone! Lewis was so gracious and humble throughout our conversation. It was the opposite from my experience with the Bond campaign.

And this voter's mind was changed. I've voted for him ever since.

It's a hard year for heroes. Farewell and Godspeed to you all. Especially John Lewis.

I don't think I'd ever heard of him before he died, but reading about what he achieved, and the way he achieved it, was quite an inspiring thing.

Thanks, Pete. Lewis was a man who literally had skin in the game, yet remained true to his ideals throughout all his years in Congress. Proud to have lived in his district.

Your writing is wonderful as always. Thank you for the reflections.