Why Samuel L. Jackson Didn't Go To My High School 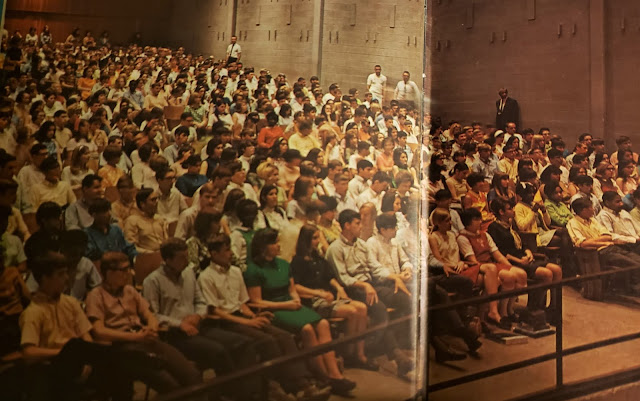 Last weekend, Liam and I were watching The Phantom Menace and when Samuel L. Jackson appeared as Mace Windu, I said, "You know, he grew up in Chattanooga, and he's just a few years older than I am."

"Did you go to school together?" he asked.

And so our conversation began. About white schools and black schools and the was it was way back when. Yes, in the middle of Star Wars.

I started high school in the fall of 1966. That was the first year that Chattanooga schools were integrated - twelve years after Brown v Board of Education. Twelve years. So after years of sinful foot-dragging and instilling silly fears in our young minds about integration, we finally got to experience it for ourselves.

Honestly, I don't remember feeling the least bit nervous about going to school with black students. There were too many other anxieties about going out of my neighborhood and across town to Chattanooga (City) High School, trying to negotiate new hallways and schedules, and worrying whether my clothes were cool enough.

For me, that momentous shift from segregation to integration proved pretty unremarkable. Turns out, they were just like us, with all the teenage craziness and brains and awkwardness and talent - just kids. But I can't even imagine what it was like for Deborah and Edward and Sandra and Rosa Lee and Ann and the other black kids who chose City High over one of the two black high schools in town. My hope is that they felt welcome, that all they really had to worry about was negotiating hallways and wearing cool clothes. I suspect that was not the case. It must have been so hard.

But of all the black students who opted for City, Samuel L. Jackson wasn't one of them. He had just graduated from all-black Riverside High (which was actually the old City High before the school moved to a new building across the river and up a steep hill) and was starting Morehouse College in Atlanta in the fall of 1966. He never had the option to go to my high school because desegregation hadn't kicked in yet in Chattanooga, Tennessee.

But whenever I see him in a film, I do wonder whether he would have chosen City over Riverside if he'd had the chance.

And I think about the black kids who did decide to make their way up that steep hill, where they were greatly outnumbered by us pale kids. And I think, wow. What courage. More courage than even Mace Windu.
Posted by MaryB at 11:51 PM