A Century Celebration for the Best Daddy Ever 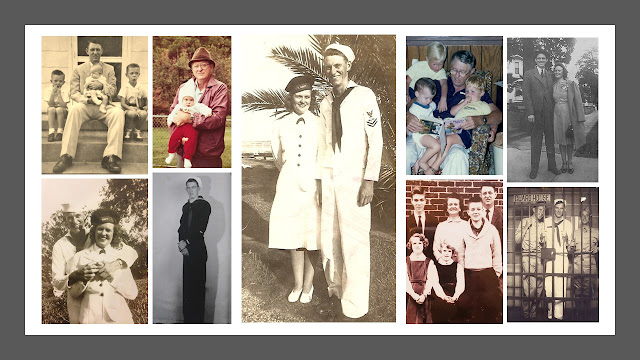 Yes, we're in the middle of a pandamic, racial turmoil, and a dodgy election, but I can't let June 10, 2020, pass without celebrating the 100th anniversary of my daddy's birth.

Born in Nashville and raised as a farm boy in Henrietta, he loved history (something I inherited from him) and Latin (which I did not inherit from him, though he begged me to take it since I had writer aspirations), but he did not love farming. His goal was to attend Vanderbilt, but that was out of the family's league, so a few years after high school, he joined the Navy.

Cutting to the chase, he landed at the Naval Air Station, Jacksonville, Florida, where he met a vivacious girl from Atlanta, Georgia, who was in the WAVES, and the rest is Frazier family history. So this rather reserved farm-boy-who-didn't-want-to-be-a-farm-boy from Nashville marries into the wild-and-wooly Bully Bartows from Atlanta, and they eventually settle in Chattanooga, Tennessee, midway between their two hometowns.

He loved to do the grocery shopping and never minded taking us with him for his weekly Friday evening run. We could always talk him into a treat or two.

He let me stand on his feet while he danced around with me.

He would break into "Swanee River," "Oh, What a Beautiful Morning," or "This Old House" whenever the urge struck him to sing. Brother David was always terrified that the preacher would call on him to sing during a church service. Never happened.

He called Mother "Kitten," and managed to put up with the crazy Bully Bartows for the duration of their 55-year marriage (till death they did part). He did, however, have the foresight to get out from under the Atlanta crowd, moving us to Chattanooga for our growing up years. Aunt Nell said she always admired the hell out of him for doing that. (Okay, yeah, Mother and Daddy moved back to Atlanta after he retired from TVA, but the Bulliest of Bartows was gone by then, so it was safe.)

Our friends loved Daddy because he spoiled everybody with Cokes and Fritos and whatever else was the going snack food of the 50s and 60s whenever they came over.

Daddy was the parent who got up with us in the middle of the night when we were sick. He also taught me how to get to sleep by telling me "Your toes are now asleep, Your feet are now asleep. Your legs are now asleep." And I was usually out by the time he got to my shoulders.

He read to us - lots of Little Golden Books. He made sure we had encyclopedias. When I was in the 4th grade, he built me a bookcase - which I still have - for all my books.

In his later years, diabetes and arthritis caused him so much physical pain. His eye sight failed, which frustrated him because he could no longer read. Diabetes took him in 1999 a couple of months before his 79th birthday.

He was a wonderful man. I'm grateful every day that he was my father. Happy 100th Birthday, Daddy!