The Fine Art of Cussin' 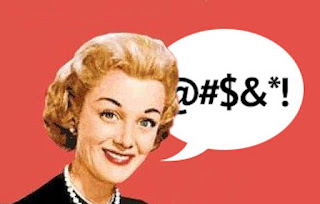 In the wonderful series The Marvelous Mrs. Maisel, the title character finds that some of the words deemed unseemly by society that she uses in her stand-up comedy act spill out into her off-stage life. Good old fashioned Anglo-Saxon four-letter words start flying out of this well-bred Jewish matron at the most inopportune times. In the middle of a wedding reception toast. During a game of Simon Says at a family Catskill resort. Yeah, she fuckin' lets it fly.

I can identify with Mrs. Maisel.

First, let me explain the difference between "cursing" and "cussin'." Want to damn somebody to hell? Put the bad juju on someone's career using colorful language? Confine someone to an everlasting roach or rodent problem with sharp words? That's cursing. Sinful. Wrong. Not nice in mixed or unmixed company.

OK, now, let fly with a "shit" when you forget something important? Give a resigned "fuck it" when you're not able to get through to someone during a conversation? That's cussin'. My opinion on this is if you're over 18 years old, let 'er rip. (Caveat: I hate hearing children and teens cursing or cussin'. They haven't earned the privilege because of lack of life experience. Also, I don't cuss in front of kids. Usually.)

Cuss words, especially those of the 4-letter Anglo Saxon hard-consonant persuasion, capture the anger and frustration of the moment. Nothing like a good old fashioned "shit!" when you drop something, stump your toe, or break a mirror. Admit it: shit = poo = poop = doodoo = cow patty = horse pucky. If you're using those words, you may as well just say what you really mean, and shit's a lot more satisfying. Same holds true for "fuck," though granted, the meaning is more adult than poop.

Those words are short, quick, and the "t" or "k" at the end bites off the words perfectly. I say short, but my mother could draw out the word shit to about 15 syllables - a Southern-style "shi-i-i-i-i-i-i-i-i-i-iiii-t," completely defeating the shock value. I, however, stand by the punchy Yankee-version. I do want to make it clear, however, that Mother NEVER used the f-word. I mean, she had her standards (which I, obviously, don't).

Whether you say it or not, you're thinking one of those cuss words when you cut your finger or drop that cherished Christmas ornament. Times like those require a punchy cuss-word. I'm just going to say 'em when needed. Folks can attribute it to my having lived in New York City for eight years or perhaps plain old senility. I don't give a damn.

Now, if you feel you need something longer and more colorful to add to the 4-letter word, I suggest spicing things up with a string of Elizabethan insults. Brush up your Shakespeare and toss in a "poisonous bunch-backed toad," "knotty-pated fool," or "vile standing tuck" when necessary. Consider it part of your literary education.

So look around. If there are no children nearby and you're over 18, go ahead and practice the fine art of cussin' as the occasion calls for it. Like, say, when your coffee mug full of freshly made brew hits the Italian terra cotta tiles in your kitchen first thing in the morning. Or you open that jury summons. Or you get a paper cut opening that jury summons.

Just let it all out. You don't want that shit festering inside.

Wonderful, Mary. I still only cuss in my head or when I'm alone. My children Wouldn't be able to cope with it if I started cussing in front of them!

I do have the advantage of living alone. I only have to clean up my act on the weekends with the kids. ;-)