How Musical Theater Restores My Faith in Everything 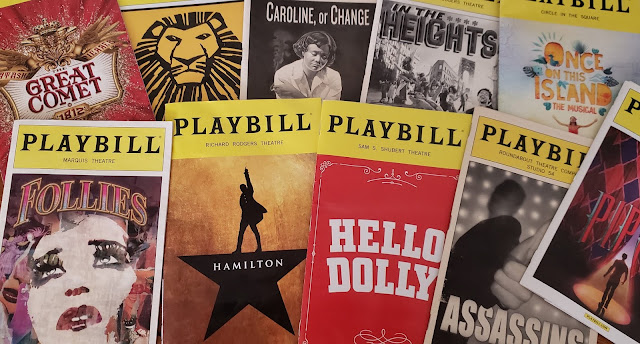 Years ago, I told a friend that someday I was going to write a book called Everything I Know I Learned From Musicals. For instance, did you know that the rain in Spain does NOT fall mainly in the plain? Now see, I wouldn't care one way or another except for loving My Fair Lady (the Julie Andrews/Rex Harrison soundtrack) and being a curious 14-year-old wanting to know if that song lyric was, indeed, factual. The point being that many a song from a musical has led me to further research on a variety of topics, most of which have proven of more use than where rain falls in Spain.

The impact of American musical theater on my life is incalculable. I know you're thinking "Wow! How shallow!" But the stories, the performances, the music, the lyrics, the costumes, the scenery, and the sheer energy of pulling all of that together make my spirit soar. Is it any wonder that musicals are getting me through this dark time in our history?

Last week, daughter and I did a whirlwind trip to New York to see Bette Midler in Hello, Dolly! Kate managed to nab tickets to a Hamilton matinee for the same day. We were on our way to an afternoon and evening that restored my faith in some important things: all the ways we need to live and work together, how crooked paths can be made straight, how gifted storytellers, musicians, and actors can show us truth and love and laughter when we need it most.

Both Hamilton and Dolly! showcase the indomitable American spirit. As different as they are, both shows capture the get-'er-done drive that has been a hallmark of our collective personality. And both expose some serious flaws in our collective DNA, as well. By highlighting our brilliance and our faults, Hamilton and Dolly! give me faith not only in the way our stories get told, but in the truth-telling stories themselves.

So, raise a glass to freedom before the parade passes by. Put on your Sunday clothes when you feel down and out, and look around look around at how lucky we are to be alive right now. I wanna be in the room where it happens room where it happens, because it only takes a moment to be loved a whole life long. (Pardon the mash-up, Lin-Manuel Miranda and Jerry Herman.) Faith and courage restored. The will to persevere and fight for our better selves returned.

And as for writing that book about learning everything from musicals, I still might do it, who knows?
Posted by MaryB at 2:39 PM

I am sure I saw a book in the library called something like that. If not, you have to do it!